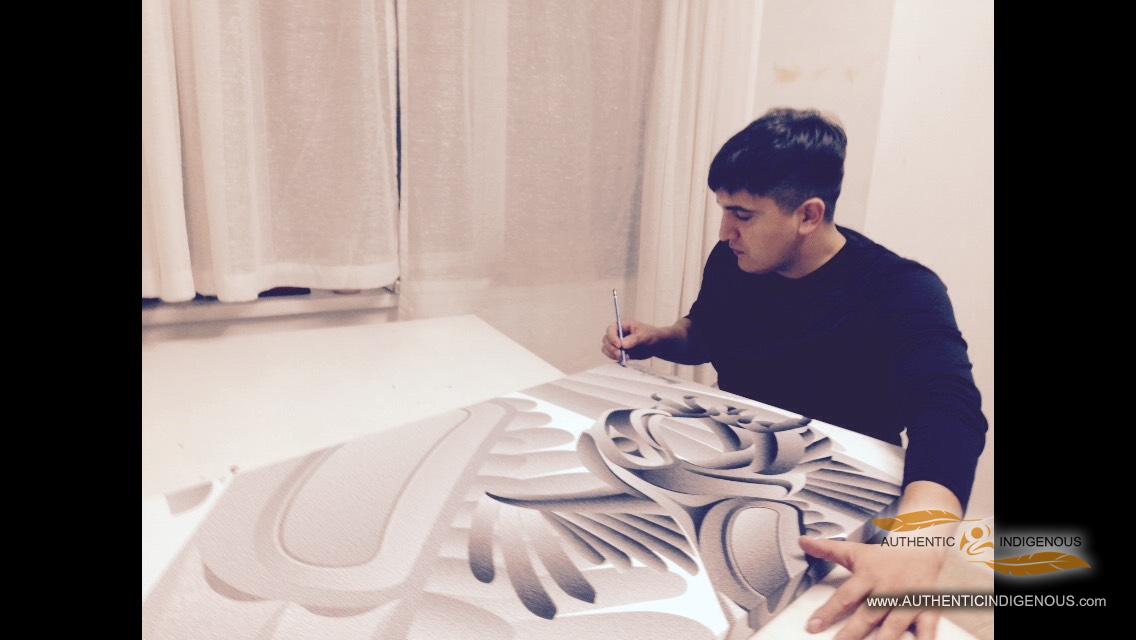 A very long time ago we all lived in darkness. At the same time an extraordinary shape shifter named Tsiskiye-Cho existed. During his time, Tsiskiye-Cho used his gifts to bring light into the world, as we know it today. The light was simply a metaphor for enlightening all of us with his knowledge. Tsiskiye-Cho made his life’s mission to share this, art, and culture for all people. My art is a vehicle to be a part of this movement and continue Raven’s mission and legacy together.

If you were to walk around, two hundred years ago, from California to Alaska you would see, wear and live northwest coast art and culture. I want to be a part of the movement that will allow this to happen once again.

Peoples of the northwest coast did not develop a written language; they developed an art form to tell the stories of our histories. This art form developed into one of the most advanced art forms in the world. This is also what makes this art so beautiful. The ways that balance is used within the form-line. When you look at a piece your eye subconsciously continues to move studying the design because one shape flows into the next using variation of curves and thicknesses.

This is the art of a once dying culture. It’s the art that is bringing the culture back alive. This is the reason why I work so hard towards my goal.

From an early age, Alano Edzerza was an adept talent at sketching and sculpture. An eventual district award in junior high school for a clay sculpture gave him the confidence and inspiration to increase his artistic endeavors. At the age of 21, Alano entered the tutelage of family member and fellow artist Terrance Campbell, followed by pursuing the art of crafting jewelry in an Arizona institution under the instruction of the famed Ric Charlie.

Consequent to completing his tutelage he began working with northern and southern descent artists, such as Jay Simeon, Marcel Russ, Philip Gray, Cory Bulpitt, Beau Dick, Mark Preston and Dempsey Bob, a leading contributor of knowledge and education to the next generation of artists from the Tahltan Nation. Bob collaborated on various projects with the artists, who in turn greatly inspired Alano to revisit the pursuit of his own artwork.

Alano’s masterful handwork didn’t stop there, however; he has since moved on to work in a variety of artistic mediums including pencil sketches, acrylic, glass works, grand-scale installations, wood panels and, recently, the design of performance sportswear. His brazen talents and tireless ambition has provided him the opportunity to work with many celebrated artists. Alano was also fortunate enough to be granted a three-year apprenticeship with Rick Adkins, a man often considered one of the top jewelry designers on the northwest coast.

Alano has so far been featured in 10 major shows, with his first solo show held in October 2007 at Seattle’s Stonington Gallery and featuring a collection of original pieces in glass, jewelry, stone and limited edition prints. 2008 saw another major milestone achieved with the celebrated grand opening of Edzerza Gallery with Black Ice, a study in gray scale art of the northwest coast. Alano followed up on its undeniable success with other shows and exhibitions.

The arrival of the Vancouver Winter Olympics that year opened even more doors of opportunity, resulting in the Vancouver Olympic Committee commission to create a large scale glass installation at Rogers Arena, as well as the ASICS and the Dutch Olympic Team contracting him to help design their uniforms for the games. Since then, Alano has been commissioned to do a variety of new projects with extensive range all over the world and his growth continues its rapid spread today.