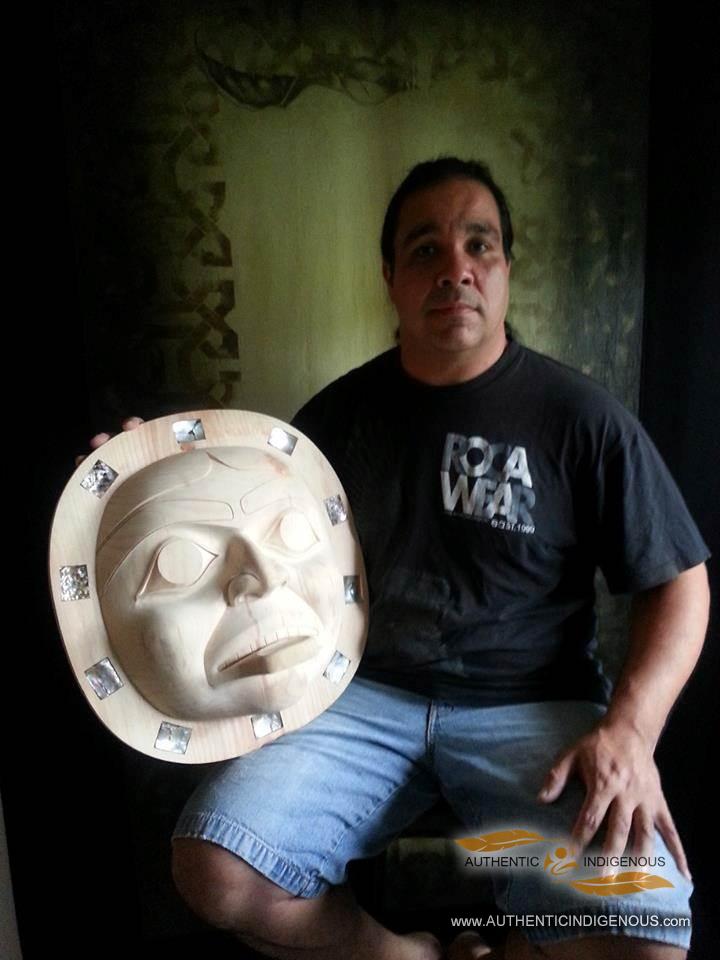 There are many levels of authenticity in Northwest Coast art. Is an object to be considered Northwest Coast Native art simply because it looks like it? These images go back thousands of years. In pre-contact times only certain nativepeople were allowed to carve and they could only produce the images that their benefactor owned. The stories, dances and masks were past on through families or changed hands because of war or debts. To this day there are families of what we call hereditary carvers. These artists produce objects that are used ceremonially in potlatches. Objects that have been used in ceremonies are considered the most authentic.


Today there are many young carvers that are Northwest Coast natives but do not have a direct connection to the old-timers. They have learned the art form from teachers and by studying the old pieces. Most have apprenticed under established carvers for a number of years. Many have learned the cultural side of the art form and take part in ceremonial activities. The pieces that they create are considered authentic Northwest Coast Native Art, but are not considered artifacts. Their approach can be starkly traditional or contemporary. The availability of different materials, like glass and bronze have widened the palate of the modern Northwest Coast artist but the roots are still the same.


I am a Victoria BC born artist of Cree descent that loves this art form. Although I have not been formerly adopted by the Northwest Coast Native Peoples I have been trained primarily by my father Gene Brabant who was offered his first apprentice-ship when he was 15 years old by Tony Hunt Sr.-Art of The Raven Gallery which he accepted when he was 23. He was carving with John Livingston and in the Hunt studio between 1971-1980. I have grown up in his cedar chips, had the privilege to study and work many years under and alongside some of the best Native Artists from the North West Coast, and been included in helping carve and produce ceremonial pieces and poles, BUT I would never consider my own work authentic Northwest Coast Native Art. I have a deep reverence and respect for the origins of this style, design, and the peoples it has come from, as well as each and everyone who has influenced me today and tomorrow~ and that energy is in every piece I carve and produce.

Born in Victoria BC 1970~ Metis~ Jay started to carve at the age of eight under the tutelage of his father Gene Brabant who was taught by John Livingstone and Tony Hunt at Arts of The Raven Program in the early ‘70s..

Jay works with wood, metal, shell and paper. His primary medium is red and yellow cedar, along with alder and spruce. Jay has been trained in the Kwakwaka’wakw style but he often works in classical Nuxalk or Bella Coola, Tlingit and Haida styles. He has been taught the traditional/ proper shapes and form-lines that define historical properties and stories of the pieces with respect and dignity in great detail. He primarily carves original Northwest Coast Indian Art and is occasionally commissioned for art pieces of historic master works. He has traveled extensively to visit museums and study older pieces.


Jay, like his father Gene, has often chosen to work on the perimeters of the market although he has been included in many exhibitions and is represented in many private and corporate collections.


Jay continues to produce a variety of Totem Poles, Masks, Rattles, Bentwood Boxes etc. and his works are featured in fine galleries such as, Quintana Gallery, The Douglas Reynolds, Stonington, Coghlan Arts, The Inuit, The Spirit Wrestler, Coastal Peoples, The Black Tusk Gallery, The Indigena Gallery, as well as the hard covered book Northwest Coast Carving Traditions by Karen and Ralph Norris, and has been featured in many editions of the North American Indian Art Magazine.