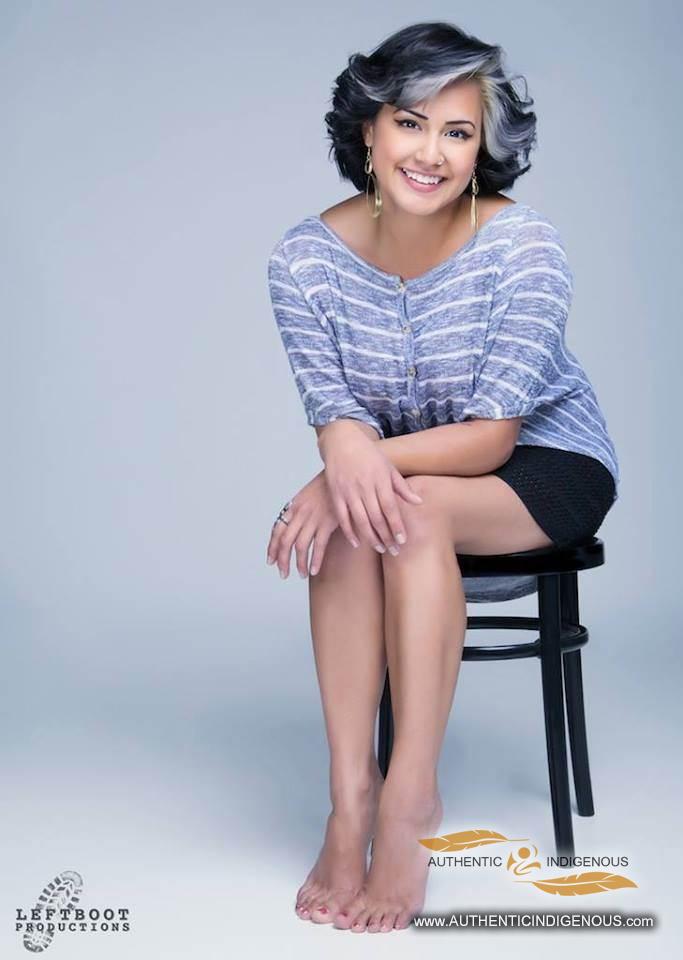 Claiming to be a multidisciplinary artist, I have studied at the First Nations University of Canada for 5 years. I found that not one medium alone enables me to portray issues and topics of Indigenous and Societal importance. Most of my work has brought up ideas behind womanhood, sisterhood, sexual violence, and stereotypes. As well on a more traditional scale I practice stone carving and storytelling.

Julianne has started to embrace the role of her spirit name which often involves artistic skills and leadership. Julianne’s heritage is a combination of Membertou (Mik’Maq) First Nation, Nova Scotia and the Cowessess (Cree) First Nation in Saskatchewan as well as Metis ancestry from Norway House and Obijwe from Waywayseecappo, Manitoba

As far as she can remember, she was always in tune with spirituality, collecting rocks and drawing.

When Julianne was 15, she was enrolled into Luther College High school in Regina, SK. This school is known for its prestigious academics including an advanced IB Art program. She was mentored by her art teacher Mr. Drew Hunter for 2 years in this program and at her graduation she received “The Nostbakken Award for Visual Art 2009″ which honors a gifted student in any grade who demonstrates unique talent, temperament, ability, and perseverance in the making of art. This award was established by Richard and Ann Nostbakken. Mr Nostbakken taught art at Luther for 30 years and mentored her teacher. She then brought her talent to the First Nations University of Canada where she studied for 5 years.

Julianne, realized her social responsibility at SHIFT 2010, an art symposium that took place at The Mackenzie Art Gallery. Where she had the chance to attend many workshops by artists from Canada who contributed to society by making indigenous issue based art. One artist was her Indian Art History professor Judy Anderson. After this experience, Julianne begun to design indigenous inspired art such as her Treaty Mural which is painted on a 9ftL and 18ftW wall at The Gathering Place on 4001 3rd Ave North in Regina, and tattoos. She was also involved in National Aboriginal Fashion Week 2012-13, as a model and assisted cinema make-up artist Nina McArthur. At NAFW, Linsay Willier (Canada’s Next Top Model) and Ashley Callingbull (APTNs Blackstone) trained the models for the runway.

Aside from artistic empowerment, Julianne is also an advocate for the indigenization of education here in SK. She was adopted into a family of strong female leaders and follows the footsteps of her grandmother Susan Beaudin who spent years of her life creating the Treaty Education Curriculum for K-12 in Saskatchewan. In 2011, with the support of her cousin Creeson Agecoutay she drafted up a petition to mandate the teaching of Canada’s colonial history on the post-secondary level. Julianne, along with her friends noticed that there needed to be change at the University of Regina for the comfort of all students on the campus. She has been the lead voice of the movement titled The Students Initiative to Change On-Campus Systemic Racism and has been working closely with the administration to take effective action. Julianne uses all her experience to fuse both the artistic, activist and fashionable sides of herself.