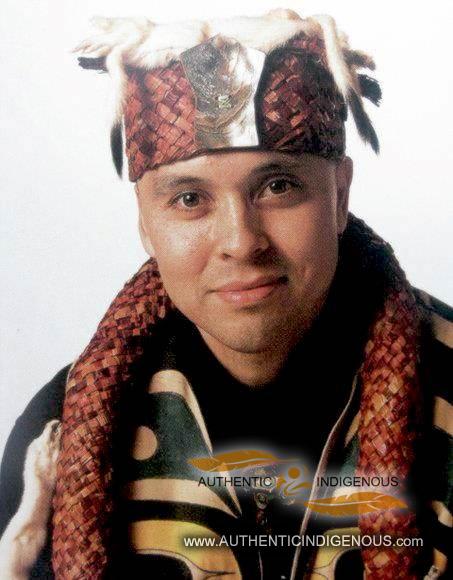 I consider it a great honor and a great responsibility to continue the tradition of carving…it is a tradition that has been in my family for countless generations.

Kevin Cranmer was born in Alert Bay, British Columbia, but has lived all but four years of his life in Victoria. Kevin can trace his ancestry to many tribes in the Kwa’kwaka’wakw nation, ‘Nagmis (father), Mamalilikala (mother), Kwagiutl (paternal grandmother), Da’naxda’xw (maternal grandmother), Lawit’sis (paternal great-grandmother), and can also trace his roots to the Tlingit of Alaska. Cranmers’ great-great-great grandmother, A’nisalaga (Mary Ebberts), was a Tlingit noble woman from Tongass, Alaska. She was a Chilkat blanket weaver of great regard and the matriarch of the Hunt family of the Kwagiutl tribe from Tsaxis (Fort Rupert). He descends from the Cranmer, Flanders, Hunt and Bruce families.

Kevin’s first artistic experiences came as a small boy when he would accompany his father to Tony Hunt’s original Arts of the Raven Gallery. It was during these times, when he watched his father and other artists at work, that the seeds of interest were planted that would lead to the many artistic endeavors that would follow. Inspired by his father, Danny, and encouraged by his mother, Lily, his first formal instruction came under the tutelage of his cousin, George Hunt Jr. After a time, Kevin approached master carver Tony Hunt with whom he worked to further his understanding of traditional Kwagiulth design.

During his time with Raven Arts, Kevin observed and worked alongside such renowned artists as Tony Hunt Sr., Tony Hunt Jr., and Calvin Hunt. His first carvings consisted of smaller pieces such as plaques, rattles, and figures before progressing to masks, feast dishes, and model poles.Kevin’s introduction to larger monumental sculpture began when he first started to work alongside renowned Nuu-chah-nulth artist Tim Paul in Thunderbird Park at the Royal British Columbia Museum. Working in the park had special meaning to Kevin. Thunderbird Park was first started by Mungo Martin, one of the most accomplished Kwagiulth artists of his or any other time. Martin was also a relative, having been married to Kevin’s great-grandmother, Abayah.

Kevin’s credits include several large cooperative projects: a forty-foot pole, which stands in Stanley Park, Vancouver, a thirty foot pole on display at the Museum of Civilization in Ottawa and a thirty-six foot pole carved for the closing ceremonies at the 1990 Commonwealth Games in Auckland, New Zealand.

Kevin has been initiated as a Hamatsa, the most important of the complex dance societies of the Kwagiulth. In becoming a Hamatsa, Kevin has become increasingly aware of the role an artist plays in relation to the potlatch ceremony. The Cranmer family has a rich history of potlatching, the high standards of these ceremonies being set by Kevin’s late grandfather, Chief Pal’ nakwala Wa’ kas (Dan Cranmer). The greatest satisfaction Kevin gets from being an artist is creating pieces for family and the use of his work in ceremonies. So long as there is a need for such regalia, Kevin will continue to strive to fill the need and grow and learn as an artist.

Bentwood Box|Carvings|Drums and Accessories
My Toolkit