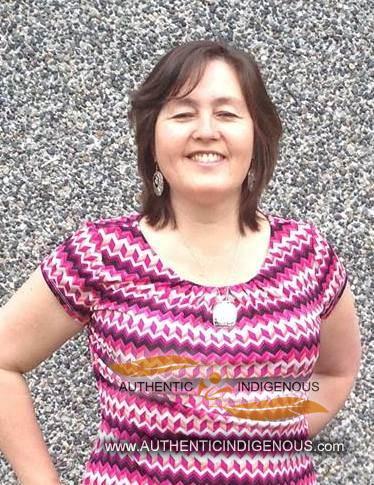 My work is my own authentic idea created from the traditional dream catcher in which I call Spirit Catchers”. My Spirit Catchers are a variety of welded animal shapes that are wrapped with suede. Each animal is then hand stitched with a variety of items such as sinew, glass beads, bones, shells, stones, feathers, and wood accents. The real meaning of my creations is the written stories for each individual piece of artwork.

My name is Nancy A. Luis. I am Cree from Manitoba and Iroquois from Kahnawake, Quebec, Canada. I am a registered Metis Citizen of Canada.I have designed unique animal-shaped dream catchers that I call “Spirit Catchers”. Some of my animal shapes include but are not limited to: Eagle, Raven, Bear, Sun and the Moon. My work represents my cultural teachings while attending the Native Education College in Vancouver BC. It is through the Elders, Teachers, Student Body, and Community at large that I learnt a great deal of what it means to be an Aboriginal Citizen of Canada.I began making animal shape dream catchers to be authentically unique yet culturally meaningful. It was from my journey to the old growth forest at Simms Creek near Whistler BC in 1999 that I seen the need to be creative.

I began to have significant dreams of animals which resulted in many works of art and written stories. Since then I have attended the Vancouver 2010 Olympics as an Aboriginal Artist; Circle Craft from 2010-13; and in 2011 my story was the inspiration for the Klahowya Village theme of the “Raven Steals the Sun” and I am currently working on the second story line for the 2014 Klahowya Village at Stanley Park.I do not have one particular mentor, but a community of support through my cultural education at the Native Education College and many Aboriginal Community members that support the teachings at the College.

It is also through community associations such as Aboriginal Tourism of British Columbia that I am supported too.The single most important thing in regards to my art work is the written stories that I have created for each one and the meaning behind them.It is through Spirit; my culture; and my continued networking through my Aboriginal Community that I get the most inspiration from.