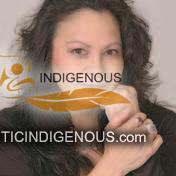 As an artist, teacher and curator, Rose works with emerging visual artists whose work in contemporary
mediums transmits ancient visions. In keeping with the traditions she inherited from her people, Rose shares her experiences in the arts world with First Nations communities.

Her mission in the arts is to motivate First Nations peoples towards personal growth, cultural integrity and creative
ingenuity.

A Salish woman from British Columbia, Canada, Rose was raised within her people’s territories on Vancouver Island. She received her Bachelors Degree in Fine Arts, First Class Honours in 1989 from
the University of Victoria. The Canadian Native Arts Foundation awarded Rose a scholarship to
attend the Institute of American Indian Arts in Santa Fe, New Mexico where aboriginal instructors teach indigenous art techniques and styles to aboriginal students. Rose found her time there to be a profoundly unique experience which inspired her to later become a visual arts instructor.

Rose has exhibited her own work in Canada, the United States and Ljubjana, in the former Yugoslavia.
Her works may be found in private collections in Italy, Saudi Arabia, Germany, and England and throughout North America. Selected works by Rose Spahan have been published by Theytus Books, Institute of American Arts Press, Mix Magazine, and International Biennial of Graphic Arts.